Well this year's LI Toy Show was awesome. Sold a lot of my old toys, got to hang out with Doctor Kent, my wife Beth & my best friend/packaging designer Andrew Fuschetti. I didn't buy as much as I typically do, but I think that was mostly due to me being at my table 95% of the time. When I did get a chance to zip around the floor I snagged these items: 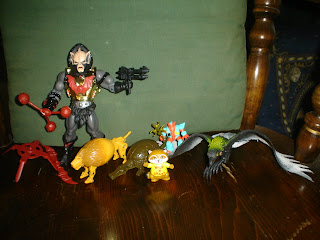 Snagging MotUC Hurricane Hordak MOC for $25 was a steal, I'd missed out on him when he went up for sale on Mattycollector.com so grabbing him for 3 bucks more then cost was great. Finally finding my vintage Modulok's 1st half of his blaster was exciting also as I'd been looking for it for a while. I lost the front half when I was a kid so now after about 20+ years I finally got both halves of his blaster. Now I just have to dig out Modulok.... 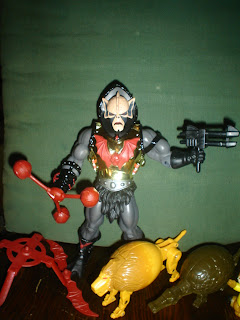 Now, as I'm a later-era MotU fan (I got into the toys in the 1985 era, not when they first came out in 1982) the Meteorbs were always part of my MotU toy battles as a child. I only hadTuskor (Heroic Mammoth) & Orbear (Evil Grizzly Bear) when I was growing up & it wasn't until sometime in the late 1990's-early 2000's that I managed to find a MOC Meteorb on eBay;Cometroid. I'd been wanting to get Crocobite as I both love his colorway and crocodiles/alligators. He was $20.00 and was in like-new condition so it was a worthy purchase.Astro Lion I got from a different vendor at the show for $8.00 but his rear legs are a little loose so he doesn't stand perfectly (probably why he was only 8 bucks). 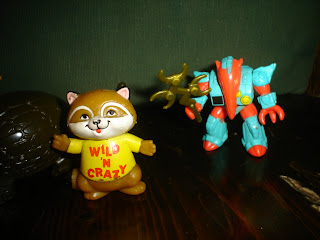 When I was a very young child, 'The Shirt Tales' was one of my favorite cartoons. I had Digger & Bogey figurines for years and then last year at the 1st Annual LI Toy Show I found Tyg, and then this year I found Rick. Now I just need Pammy & I'll have the whole team. He was $3.00 so not bad at all. The Anteater Battle Beast cost me $8.00 and his rub sign & weapon are intact. 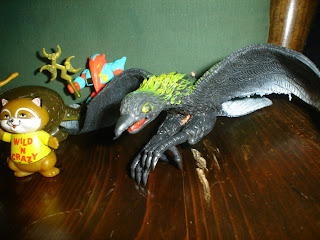 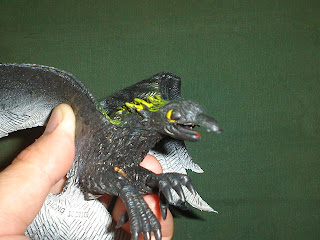 This bird thing was 50 cents, and totally worth it. I love these old early 80's toys where the sculptor really took alot of creative liberty on sculpting things. I've never seen a bird look like this, but this thing is just such a random odd-ball thing that I had to have it. As a sculptor, it's interesting to me how the designs of things differed so much over the years. Now a days, everything seems too "perfect" in terms of design, and this bird thing is a reminder of a time where toys didn't have to look perfect, just appealing enough to the eye to be cool for the customer to want to buy it. It was supposed to have a elastic cord to hang it from the ceiling, but that long since snapped off. All and all this thing is awesome & I wish I'd found more cool things like this at the show. If anything, seeing the method they took to sculpt feathered details on this toy is something I'll try applying to sculpts of mine in the future.
Posted by Chris "Bah'glenn" Negri at 4:35 PM 2 comments: